There is so much in the news today about Penn State and the awful reality of child abuse and silent adults. A clip from one of the many reports includes the following:
(CBS) – The question many people are asking in the wake of the sex abuse scandal at Penn State is simply this: Why didn’t anyone call the cops?
The explosive grand jury report found that at least eight people at Penn State had either witnessed former coach Jerry Sandusky molesting children, or been told that others had witnessed abuse. And yet, it seems, not one of them informed law enforcement authorities.

I find when I read just that, I feel sick in my gut. And then there are more details that add to the sick feeling and reinforce the tragedy of this situation in the lives of the children (who are now young adults) who were abused and the people who love them.

There is so much press surrounding this case and often I am struck by who is being spotlighted and how at times, the true victims are missed in all the conversation and activity. There are many lives that are drastically altered in the last days. There are many people who need our prayers, some for healing, some for wisdom and discernment and some for repentance.

May all of us learn from what surrounds us. We may not be directly impacted by those who chose silence in the Penn State locker room or football program, but I wonder where silence is affecting you or someone you love. It is my hope that we do not choose to be silent about things that matter. 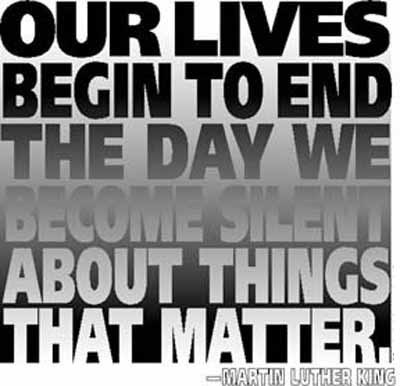 I am on a life long journey to live with integrity, honesty, kindness and full of grace. View all posts by trishborgdorff

‎"Friendship is born at that moment when one person says to another, 'What! You too? I thought I was the only one." ~ C.S. Lewis

The longest journey of any person is the journey inward...